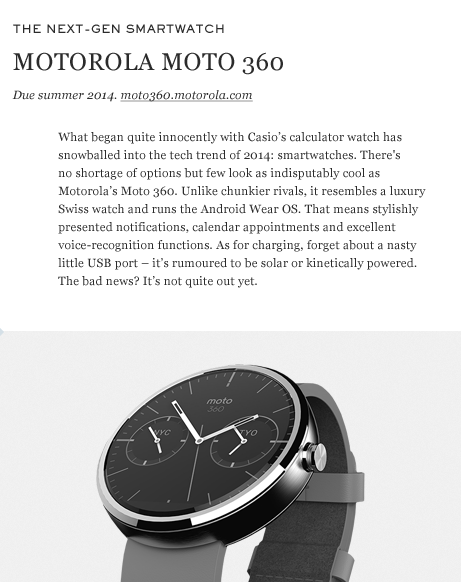 It seems that soon we won’t need to worry about the failings of the human body – we’ll all be cyborgs. Or at least we’ll look like cyborgs, thanks to wearable technology. From smartglasses to internet-connected suits and virtual-reality headsets, wearables are high on the tech agenda.

Later this year we should see the launch of two game-changers that will further bring wearable tech into the mainstream. Firstly, Apple’s hotly anticipated “iWatch” (reportedly due Autumn – pitch your tent now :-)), which is rumoured to be made of curved glass, charge wirelessly, feature health-improving apps and will almost certainly liberate wearables from the geekier end of the tech spectrum.

Secondly, there’s Google Glass styled by Ray-Ba expected to launch at the end of the year.

While we wait for these two seismic launches, here are some cool-looking wearable tech pieces either available now or due for release in the coming months. Just don’t wear them all at once. Well, not unless you want to look like a cyborg…